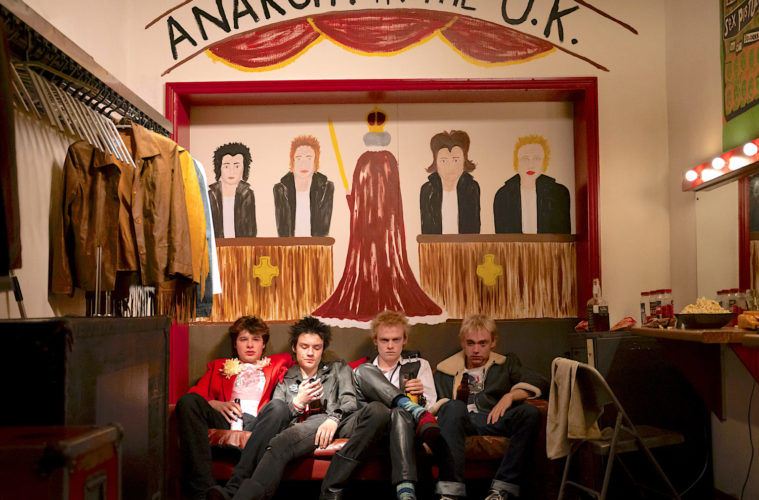 Danny Boyle was 19 when the Sex Pistols’ notoriety exploded in England. The band had a great impact on the filmmaker’s life that would inspire him for years to come. Boyle, best known for acclaimed films including Trainspotting, The Beach, 28 Days Later, and Slumdog Millionaire, had a strict Irish-Catholic upbringing and was already supposed to go into the priesthood, but his affinity for theater in school led him down another, more creative path. Danny Boyles’ Pistol, a six-part FX series chronicling the formation and decline of the infamous punk group, is in many ways a homage to his youth, and really all English youth who came to discover that doing what was expected by family or society in general, wasn’t necessarily what was best for them.

“When they emerged they represented a complete change of everything, in the way that the Beatles didn’t, for example, maybe Elvis further back…  they represented proper change in society where everything was just shattered,” Boyle tells us via speed during the press day for the film. “They were this force that stopped life from being stiff. I come from a very similar background to the guys, where your life was laid out, you were going to follow in your father’s footsteps, you were going to kind of become your mom or become your dad. And you could see it in the fact. People started to dress like their parents. They were like, ‘no—use rubber, use leather, use t-shirts with pictures of penises on them.’ 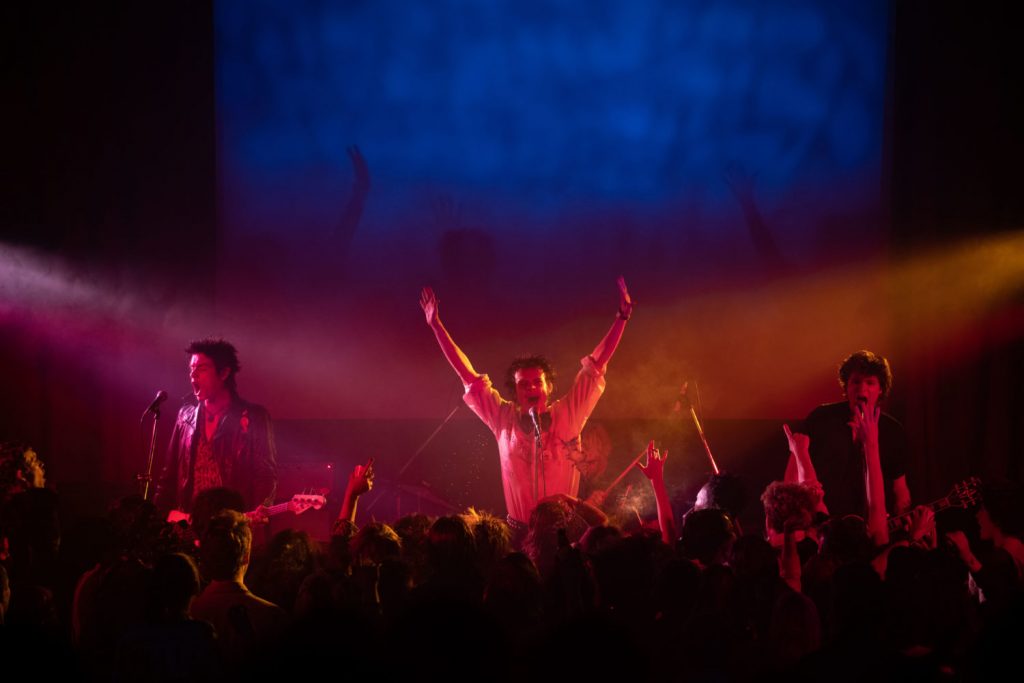 “They detonated the stultifying character of Britain, and I imagine it resonated around the world,” Boyle continues. “But I understood it in British terms and when I look back, I owe a lot of my career to the way that shaped me, and the freedom that gave me to believe in your own rules, not other people’s.”

Of course, Boyle, who has been nominated for several BAFTAs, Oscars, and Golden Globes (Slumdog scored him all three for Best Director), has always played by his own rules. His gritty however beautiful filmmaking style, which plays with pacing, from fast and frenzied to ponderous and intimate, has become a identifying characteristics of his cinematic storytelling. Embellished and heightened by liberal use of archival footage, Pistol is an exhilarating musical kick in the bum as it was intended and a modern bookend to the slate of films that have attempted to tackle the mythic story of the band– from Julien Temple’s fun but corny The Great Rock ‘n’ Roll Swindle to his documentary The Filth and the Fury to Sid & Nancy (the movie that made Gary Oldman a star).

Fury is the only proper doc, and it remains the best of the bunch if you want to fully know and understand the band’s true trajectory. Punk policing and accuracy aside, Boyle’s artistic interpretation of the Pistols’ story is at the minimum just as exhilarating. And it’s not just his story. alternation by Craig Pearce (best known for his work with Baz Luhrmann), from Steve Jones’ 2016 memoir Lonely Boy, the story unfolds in a way that sort of gets everyone’s point of view accounted for– it seems to try at the minimum. Jones (Toby Wallace) is an abused kid who finds his chosen family in the mythical UK punk fact boutique SEX, owned by Vivienne Westwood (Talulah Riley) and Malcolm McLaren (Thomas Brodie-Sangster). The pair become parental figures to the young hoodlum, and ultimately puppetmasters, as they take over his young band—including bassist Glen Matlock (Christian Lees) and drummer Paul Cook (Jacob Slater), naming them, dressing them, and ultimately guiding them into infamy as vessels for their anarchistic pop culture dramatical change.

Read our 2017 interview with Steve Jones about Lonely Boy here. 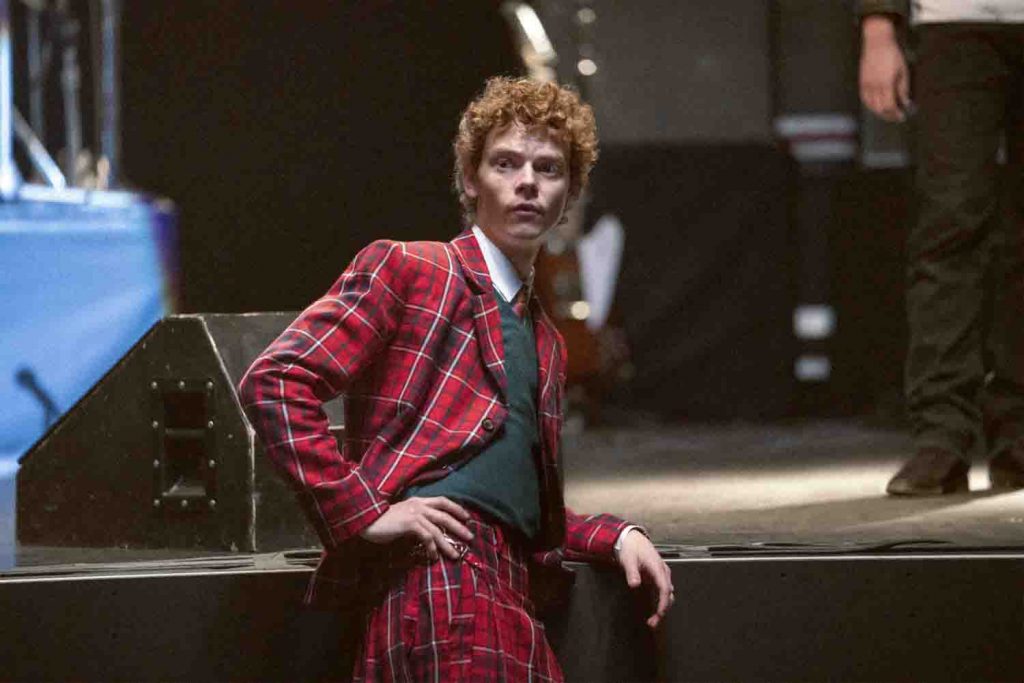 McClaren has always come off as a manipulative cad, and as played by Brodie-Sangster (who most people will recognize from The Queen’s Gambit, but we can’t unsee as the kid from Love, truly) he’s a pretentious parody, but he nevertheless feels accurate, as the real man presented himself as such. Other than Jonesy and his love interest Chrisse Hynde (an amiable if miscast Sydney Chandler), everyone mostly feels like a caricature in Boyle’s film, but this works with the film’s style and subject matter. Any fan of the band will recognize the personalities and dynamics at play. Louis Partridge, by the way, communicate a more child-like if less complicate Sid Vicious than Oldman did in Sid & Nancy.

John Lydon took issue with his portrayal and the movie already before filming began (after refusing to OK the group’s music for the project, his former bandmates sued him and won due to an agreement that licensing approvals would be on a “majority rules basis”). The frontman formerly known as Johnny Rotten has nevertheless not endorsed the film and he already called Boyle an asshole on UK Morning TV recently. We had to ask the director about it, of course.

“Discord is sort of part of his genius, which I think the series, as you go on, shows more and more,” Boyle says of Lydon. “You realize that is a very particular part of his makeup. And if you’re going to make a TV series about it, you can’t expect him to be all cuddly, because it wouldn’t be accurate. You know, he is a confrontational provocateur. And that’s his genius, his makeup… and you’ve got to celebrate it, you’ve got to capture it and celebrate it. I think no matter what he says about the series, I hope that he watches it, and he realizes how much the people who made it think he is a genius, truly, because I do. And I think Anson who played him does in addition, so that’s genuine.”

Indeed, you can feel the filmmaker’s reverence in pretty much every installment of Pistol, maybe especially in the “Rotten” and “Nancy and Sid” episodes, in which there are obvious attempts to add size to the iconic personas of all three. Rotten ironically, comes off more sympathetically than we’ve seen him in anything else. The episode providing background to the song “Bodies” is the only misstep in the series, as it introduces a new character with a triggering tale that takes away from the band and their story, which is all we really want to see.

nevertheless, the supporting characters in the band’s punk posse are pivotal and pretty wonderful to watch too. Beth Dillon as a pre-Banshees Siouxsie Sioux and Game of Thrones’ Maisie Williams as famed UK punkette Jordan provide the moxie and most importantly the looks needed to convey the badassness of the scene at the time, which shaped fact, music, and already feminism in ways they’d never imagine. The styling by the way, is near perfect; looks from the era are replicated with obvious attention to detail—from the spikey hair to the latex looks and plaid bondage pieces.

If FX and Hulu’s connection to Disney evoked concerns that Pearce and Boyle’s story might be a wholesome wash of the U.K.’s greatest unwashed, the duo quash it pretty early on. Pearce’s work is unapologetically audacious most of the time, and as for Boyle… just give Trainspotting or already 28 Days Later, a re-watch and ask yourself if this man is the kind to shy away from unpleasantness. That said, taking on the Sex Pistols and their lore would be a challenge for anyone. Punk purists will find fault with anything and if the interpretation isn’t 100% true to life, naysayers are sure to shoot negativity. But Boyle’s take is clearly more concerned with capturing the anarchistic whirlwind, and his artistic interpretation is “punk,” no matter what that method to modern audiences. 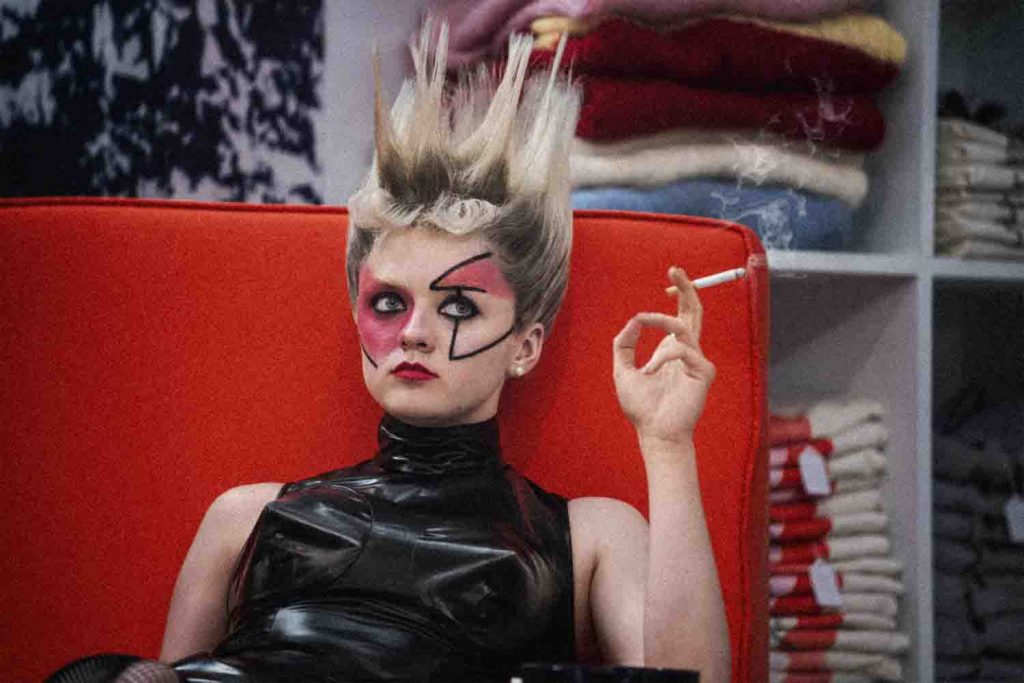 “It’s not a historical document and I don’t know how you would make a truly authoritative historical document because they all disagree regularly about what happened,” reminds Boyle.  “Discord is sort of part of their character. If they find themselves agreeing too much, they agree to disagree. Then they just start disagreeing. I average, it’s just continued with them. But what you’re trying to do is you’re trying to get people lost. You know, the viewer is in a gallery, and in the gallery are real events, things that we can all agree on because they did happen.”

Boyle understands that viewers want realism, or close to it, but he also never forgets that modern audiences are watching with their own preconceived norms and ideas. “You want to feel that you are watching truth about 1975 without having to make a big effort to go back there,” he explains. “It’s just fluid in front of you. It feels convincing. And however it’s not oppressively nostalgic, because nostalgia kills everything. It feels vibrant and alive now, because the gallery you’re in is the now.”

All six episodes of Pistol are on Hulu now.